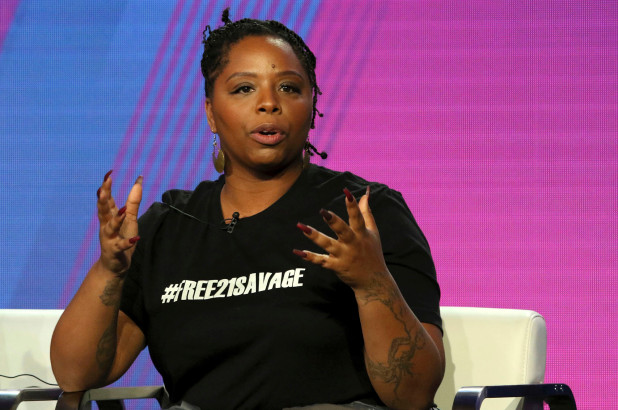 UPDATE BY DISCLOSURE TV NEWS AT THE BOTTOM

As protests broke out across the country in the name of Black Lives Matter, the group’s co-founder went on a real estate buying binge, snagging four high-end homes for $3.2 million in the US alone, according to property records.

Patrisse Khan-Cullors, 37, also eyed property in the Bahamas at an ultra-exclusive resort where Justin Timberlake and Tiger Woods both have homes, The Post has learned. Luxury apartments and townhouses at the beachfront Albany resort outside Nassau are priced between $5 million and $20 million, according to a local agent.

The self-described Marxist last month purchased a $1.4 million home on a secluded road a short drive from Malibu in Los Angeles, according to a report. The 2,370-square-foot property features “soaring ceilings, skylights and plenty of windows” with canyon views. The Topanga Canyon homestead, which includes two houses on a quarter-acre, is just one of three homes Khan-Cullors owns in the Los Angeles area, public records show.

Some fellow activists were taken aback by the real estate revelations.

Hawk Newsome, the head of Black Lives Matter Greater New York City, which is not affiliated with Khan-Cullors’ Black Lives Matter Global Network Foundation, called for “an independent investigation” to find out how the global network spends its money.

“If you go around calling yourself a socialist, you have to ask how much of her own personal money is going to charitable causes,” he said. “It’s really sad because it makes people doubt the validity of the movement and overlook the fact that it’s the people that carry this movement.”

Last year, Khan-Cullors and spouse Janaya Khan ventured to Georgia to acquire a fourth home — a “custom ranch” on 3.2 rural acres in Conyers featuring a private airplane hangar with a studio apartment above it, and the use of a 2,500-foot “paved/grass” community runway that can accommodate small airplanes.

The three-bedroom, two-bath house, about 30 minutes from Atlanta, has an indoor swimming pool and a separate “RV shop” that can accommodate the repair of a mobile home or small aircraft, according to the real estate listing.The Peach State retreat was purchased in January 2020 for $415,000, two years after the publication of Khan-Cullors’ best-selling memoir, “When They Call You a Terrorist.”In October, the activist signed “a multi-platform” deal with Warner Bros. Television Group to help produce content for “black voices who have been historically marginalized,” she said in a statement. It is not known how much Khan-Cullors received in compensation in either deal.

Khan-Cullors began her buying spree in LA in 2016, a few years after the civil rights movement she started from a hashtag — #blacklivesmatter — with fellow activists Alicia Garza and Opal Tometi began to gain traction around the world.

That year, she bought a three-bedroom, 1.5-bathroom home in Inglewood for $510,000. It is now worth nearly $800,000. Khan-Cullors added her wife, the co-founder of Black Lives Matter in Canada, to the deed in a family trust last year. The couple married in 2016.

Two years later, in 2018, Khan-Cullors purchased a four-bedroom home in South Los Angeles, a multi-ethnic neighborhood. Khan-Cullors paid $590,000 for the 1,725-square-foot home, although the price has since climbed to $720,000, according to public records.

Three of the homes were bought in Khan-Cullors’ name, and the Topanga Canyon property was purchased under a limited liability company that she controls, according to public records cited by “Dirt,” the real estate blog that first reported the March 30 purchase.

Last year, Khan-Cullors and Khan were spotted in the Bahamas looking for a unit at the Albany, a real estate source who did not want to be identified told The Post. The elite enclave is laid out on “600 oceanside acres” and features a private marina and designer golf course. Current homes for sale include a nearly 8,000-square-foot, six-bedroom townhouse with a media room and marina views. The price is only available upon request, according to the resort’s website.

“People who buy at the Albany are buying their fourth or fifth home,” said a resort worker who did not want to be identified. “This is not a second-home residence. It’s extremely high-end, and people are coming here for complete and total privacy.”

While it’s not clear if Khan-Cullors purchased a property at the island retreat for the super-rich, her mere interest shows just how far she has come from the hardscrabble Van Nuys neighborhood in LA where she spent her childhood with two brothers and a younger sister.

In her memoir, Khan-Cullors describes growing up in a housing project less than a mile from the affluent and largely white neighborhood of Sherman Oaks, a community of wide lawns and pools where “there is nothing that does not appear beautiful and well kept.” The four kids were mostly raised by her single mother, who worked 16 hours a day to support the family, she writes.

Growing up, Khan-Cullors lived in “a two-story, tan-colored building where the paint is peeling and where there is a gate that does not close properly and an intercom system that never works,” she writes. “The only place in my hood to buy groceries is a 7-Eleven.”

Khan-Cullors embraced activism and Marxism at a young age. “It started the year I turned twelve,” she writes. “That was the year that I learned that being black and poor defined me more than being bright and hopeful and ready.”

But she didn’t rise to national prominence until 2013, when she and two other activists protested the not-guilty verdict against George Zimmerman, who shot dead Trayvon Martin, an unarmed black teenager in Florida.

Black Lives Matter protests erupted again in 2020 after the May killing of George Floyd, who died after a Minneapolis police officer knelt on his neck during his arrest.

Donations and pledges from corporations and individuals poured into the movement at that point. In February, the BLM nonprofit co-founded by Khan-Cullors told the AP that they took in $90 million in 2020, with $21.7 million committed to grant funding and helping 30 black-led groups across the country.

Black Lives Matter leaders would not specify how much money they took in from prominent donors, according to the AP report.

It’s also not clear how much Khan-Cullors makes in salary as one of the leaders of the movement, since its finances are split among both nonprofit and for-profit entities and difficult to trace.

Patrisse Khan-Cullors’ Topanga Canyon property was bought under an LLC for $1.4 million

Founded by Khan-Cullors and another activist, Kailee Scales, the nonprofit Oakland, Calif.-based BLM Global Network Foundation was incorporated in 2017 and claims to have chapters throughout the US, the UK and Canada, and a mission “to eradicate White supremacy and build power to intervene in violence inflicted on Black communities.” The group does not have a federal tax exemption and donations are filtered through ActBlue Charities and Thousand Currents, two nonprofits that manage the cash.

At the same time Khan-Cullors incorporated the nonprofit, she also set up the similarly named BLM Global Network, a for-profit that is not required to disclose how much it spends or pays its executives.

Some have criticized the lack of transparency.

Newsome of NYC’s BLM said, “We need black firms and black accountants to go in there and find out where the money is going.” He added that his group does not receive any financial support from the BLM Global Network.

Khan-Cullors did not return requests for comment, but on Monday, the Black Lives Matter Global Network Foundation issued the following statement to The Post:

“Patrisse Cullors is the Executive Director of Black Lives Matter Global Network Foundation (BLMGNF). She serves in this role in a volunteer capacity and does not receive a salary or benefits. Patrisse has received a total of $120,000 since the organization’s inception in 2013, for duties such as serving as spokesperson and engaging in political education work. Patrisse did not receive any compensation after 2019.

“To be abundantly clear, as a registered 501c3, BLMGNF cannot and did not commit any organizational resources toward the purchase of personal property by any employee or volunteer. Any insinuation or assertion to the contrary is categorically false.

“Patrisse’s work for Black people over the years has made her and others who align with the fight for Black liberation targets of racist violence. The narratives being spread about Patrisse have been generated by right-wing forces intent on reducing the support and influence of a movement that is larger than any one organization. This right-wing offensive not only puts Patrisse, her child and her loved ones in harm’s way, it also continues a tradition of terror by white supremacists against Black activists. All Black activists know the fear these malicious and serious actions are meant to instill: the fear of being silenced, the trauma of being targeted, the torture of feeling one’s family is exposed to danger just for speaking out against unjust systems. We have seen this tactic of terror time and again, but our movement will not be silenced.”

This article was first Published in the New York Post BY Isabel Vencent. Facebook has recently blocked this Article by the NYP. Ive decided to recreate the article to be posted on Facebook so Journalism and news wont be censored due to biased opinions. All though a persons Home is shown. No details are given for the locations due to safety of the Person in the article. Celebrity; real estate, social agendas, behavior and private lives have always and is currently a matter of public interest. Celebrity; Homes, who owns them, their property and tax value have always and are a matter of public record. Non profit organizations are also and must be transparent by law.

Opinions about this article and their emotions are also protected under the U.S constitution. But does not give anyone the right to remove a constitutionally protected freedom based on “how you feel” about it. If it did Your own feelings and opinions about this article or any other subject or event can also be stopped and removed by anyone at any time.

So the fact that “Facebook doesn’t like it, still doesn’t give them the right to remove a protected right. Especially since they are in fact a public company. And owned and publicly traded on the stock market. Also if you feel that’s not correct due to what’s called “Institutional shares”. Then there lies another question about if the public does not in fact own “part of a company” through public shares on an open market. Then what exactly do those shares represent? Ill tell ya..not a damn thing. Your just trading and buying shares of nothing between yourselves, while the real shares are held by company executives. Your public shares of nothing just give their real Institutional shares a price tag, making CEOs and companies rich.